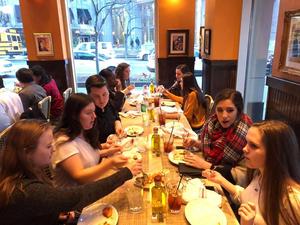 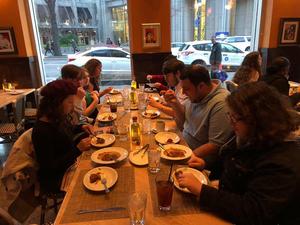 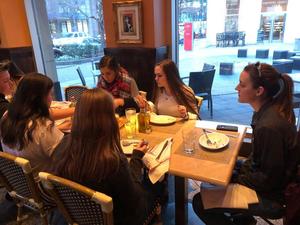 On December 18th, students from North Stanly High School enjoyed a night out in the city of Charlotte.  The high school’s Spanish club went on a field trip to Malabar, an uptown Spanish restaurant. The trip was not only filled with Spanish conversation between the students and servers, but new foods many had never tried.

Many students thought that Spanish and Mexican food were the same because both countries speak the same language.  They imagined the tortilla chips, beans and rice that they were accustomed to seeing in Albemarle’s restaurants. However, Spanish food not only varies in looks but also tastes very different from the typical “Taco Tuesday” dinner.  Spanish cuisine utilizes seafood, spices, olive oil, and fresh vegetables. A key feature of the cuisine is tapas.

Tapas are portions of food similar in size to American appetizers. Typically, several are ordered to make a diverse meal for a group of friends.  Each student tried Spanish meatballs, stuffed peppers, patatas bravas (a dish similar to American home-fries), and croquetas, small rolls of ham and vegetables fried in bread crumbs.

The tapas were followed by five different desserts. On the menu were tiramisu, churros, crema catalana, the Spanish version of creme brulee, flan de coco (coconut flan), and tres leches, a three-milk cake.  Many students preferred the churros because they were familiar with them, but the other desserts received plenty of attention from the more experimental members of the crowd.

This opportunity was important because it provided students a chance to explore elements they could not in class.  Being able not only to hear and see Spain’s restaurant culture, but taste and smell it as well, they developed a greater appreciation for the country’s diverse culinary traditions.  Students also were able to practice their speaking skills with fluent servers. By the night’s end, all agreed that the trip to Malabar was an extraordinary success.